TGE Project Officer Antipas Poon who took charge of the survey said, “We go to the countryside for the natural scenery not for the overflowing Tissue Flowers. Hikers are advised to bring their own towels or hand sanitizer. If you must use tissue, take your litter home.”

Green Hero Challenge is a charity tri-event of countryside cleanup, litter survey and contest. During the event, from 8th January to 20th March, a total of 227 participants conducted 79 actions in hiking trails of Shing Mun, Lau Shui Heung, Thousand Islands, Tai Tam, Yuen Tsuen Ancient Trail etc. A total of 14,495 pieces of litter were collected from more than a thousand kilometers of trails, a length ten times of MacLehose Trail. The trail litter survey undoubtedly covered the longest mileage in Hong Kong.

Apart from the common litter like tissue, food packaging and plastic bottles, antigen test kits, masks, hand warmer, prams, insoles and even bags of faeces were found. Many contestants whined, “The trail is covered with too much litter to clean up.” According to the statistics of the Agriculture, Fisheries and Conservation Department in 2021, the waste collected from the countryside weighed 1,800 tonnes. The survey uncovered 4,592 pieces of tissue-related litter including 3,905 pieces of tissues and wet wipes, the latter of which accounted for 20% (804 pieces). The main litter spots are found: 1. Along the trails; 2. Next to the trails reachable by cars; 3. At rest places like pavilions; 4. At viewpoints; 5. In bushes beside the trails; and 6. At campsites.

Tissue-related litter, mostly tissues, were disposed of after cleaning (e.g. wiping the mouth) and sterilizing, which can be found in spots of 1 to 4. The waste left after excretion were found in places of 4 to 6.

TGE noticed that more people visited the countryside during the pandemic but lacked the right behaviour. Take the Ngong Ping Plateau on Ma On Shan as an example. The place is a popular viewpoint for sunrise especially on holidays when many tourists or campers visited it. But tissue flowers were strewn all over the plateau after sunrise when the visitors left. It is a hideous sight.

More people went camping beyond campsites during the pandemic too. Lack of public toilets forced people to excrete outdoors. Many survey participants reported being shocked with “pile after pile of moldy and stained tissues.” In January, TGE found dozens of metres long of excretion line and overflowing tissues at the tree planting sites in a country park. A TGE staff member accidentally stepped on the faeces.

Poon said that many people threw away tissues freely believing they would decompose. Toughness is a quality emphasized by many tissue brands, and some went so far as pitching ‘soaked but unbreakable.’ Poon advised hikers to take litter home because the tissues would take weeks, even months, to decompose depending on weather, tissue thickness, etc. “New tissues are thrown away before the old ones decompose”, said Poon describing the frequent disposal of tissues in the countryside, which would bring sanitary problems if everyone throws tissues away freely believing they can decompose. Many people mistake the decomposability of wet wipes which are made of durable non-woven fabrics.

Poon advised one to excrete away from the trails and streams when one needed to answer the call of nature and could not find a toilet in the countryside. Tissues should be disposed of in a plastic bag and carried away. Poon advised portable toilet to campers.

Tissues, 10.7% of the collected litter, ranked third in TGE’s 2019 countryside litter survey. The total of 16.4% of tissue-related litter included wet wipes and packaging is about half of the amount of the latest survey. (Table 2) 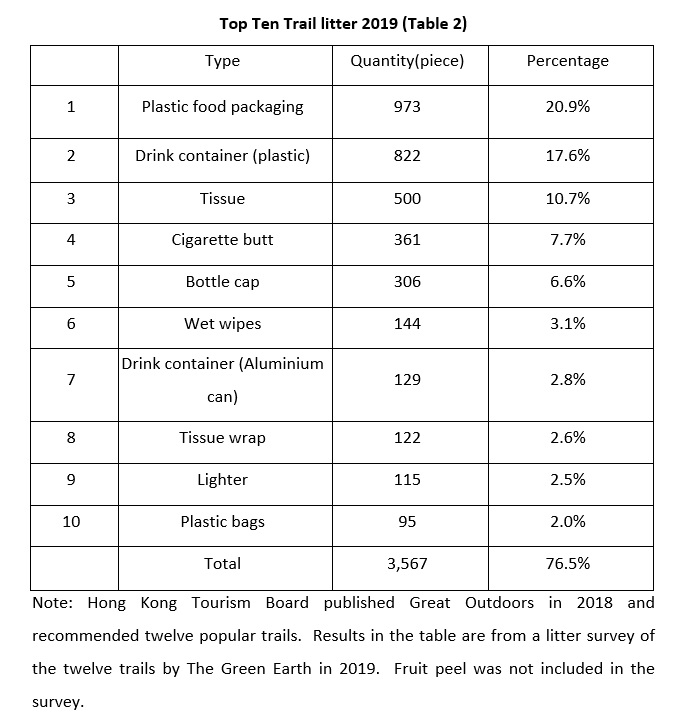 With Ching Ming Festival coming up, many people will throng to the countryside or cemeteries. The Hong Kong Observatory forecasted dry weather with east to northeast wind forces 4 to 5 on the day. TGE exhorted tourists not to smoke in the countryside, or bring portable cigarette ashtrays to take away cigarette butts.

TGE said that the latest litter survey could be used as baseline data for assessment of the countryside litter problem in the future and called on the government to keep monitoring in order to formulate policies that respond to the latest reality and trends.

TGE said more people were going to the countryside the longer the pandemic lasted as an outcome of pandemic fatigue. It asked the public to bring Countryside Quadruple to reduce litter as a way to treasure the beauty of Hong Kong people’s backyards-the countryside:
● Water bottle
● Towel
● Food-box (avoid single-packaged foods)
● Small bags (to carry and take away fruit peels, masks, etc.)