(2 June 2019 Press release) Worldwide, over 8 million tonnes of plastic waste is dumped into the oceans every year, and beverage plastic bottles are the most commonly found type of waste during beach clean-up activities that serve as a good indicator of marine plastic waste.

The Green Earth has launched the ‘Short-Lived Plastic’ Plastic Bottle Brand Research in July 2018. Since then, 43 beach clean-up activities have been conducted in 25 locations, covering Hong Kong Island, New Territories, and the Outlying Islands. Out of the 11,321 bottles collected in our study, 7,945 bottles were categorized by brands and a total of 287 brands were identified. The group was unable to identify the brands of the remaining 3,376 bottles due to the missing of labels and/or bottle caps. 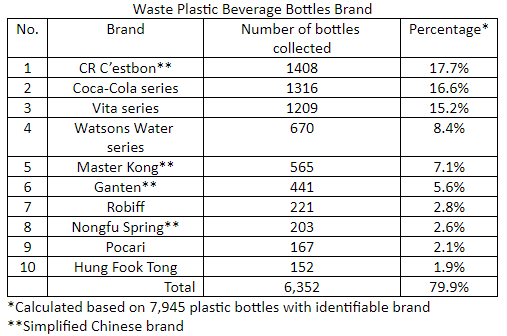 Among the traditional Chinese labelling brands, Vita ranked the first, followed by Coca-Cola and Watsons Water. These three brands have accounted for 75% of the total bottles collected (3,919 bottles). 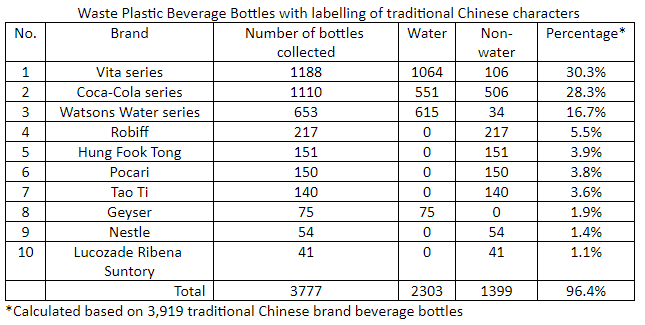 Apart from the ranking, The Green Earth has discovered the following main points:

Finding 1. Regarding bottles wrapped with traditional Chinese and simplified Chinese character labels, each accounts for 48% of the total number of bottles found, and the remaining 4% was of other languages, which reflects that the Hong Kong shorelines are greatly affected by marine wastes generated in mainland China and should be addressed.

While mainland China is the country that generates the most marine plastic waste in the world, we should apply four ways at the same time to tackle the issue: 1. To launch the producer responsibility regulation for beverage packaging as soon as possible; 2. Before the implementation of the regulation, the mainland Chinese drink manufacturers such as C’estbon, Master Kong, etc. should set aggressive plastic reduction goals; 3. To improve waste collection and recycling facilities; 4. To improve cooperation, monitoring, and reporting system between Guangdong authorities and the Hong Kong SAR government, so as to prevent plastic wastes and household waste from entering the rivers and the oceans.

Most of the international beverage manufacturers have launched and implemented plastic reduction measures. Local brands such as Swire Coca-Cola, Vita, and Watsons Water have also announced their plastic reduction target that is to recycle 70-90% of their beverage bottles by 2025. We urge the mainland Chinese brands to catch up and do not fall behind the trend.

In Hong Kong, the recycling rate of PET beverage bottles remains low throughout the years, with a recycling rate of only 6.8% in 2017. The Green Earth believes there is an urgent need for the Environmental Protection Department to conclude the consultancy study of the plastic bottle producer responsibility scheme, and to move on to the next step – legislation development.

Finding 2. According to the classification of drink types, non-water drinks such as soft drink, juice, and tea only account for 33% (2,580 bottles), while water, including both mineral and distilled water, accounts for 67% (5,151 bottles).

The Green Earth points out that the number of waste bottled water can be greatly reduced with the quicker introduction of water dispensers to be installed widely in the community and wider use of reusable water bottles by the public. Beverage producers should consider changing the format of sales from selling drinks in single-use plastic bottles to dispensing facilities.

The Green Earth would like to emphasize that an average of 20,000 disposable beverage plastic bottles are sold every second worldwide, with most of the used bottles being dumped at landfills and a very small portion have got properly recycled. We believe the most effective solution is to reduce at source, avoid purchasing single-use beverage plastic bottles, and recycle properly in case of unavoidable purchase.

To address the ocean plastic waste problems, The Green Earth urges:
1. Support ‘Short-Lived Plastic’ Plastic Bottle Brand Research to continuously monitor the plastic packaging industry. Details: http://greenearth.org.hk/plasticwaste/
2. Apart from plastic bottles, we are also expanding our monitoring coverage to plastic packaging, and the result will be released in August;
3. On 8 June ‘World Ocean Day’, we will be conducting beach clean-up and brand research in the Plover Cover Reservoir. Details: https://forms.gle/Zs6JyxofxXNypdBN7 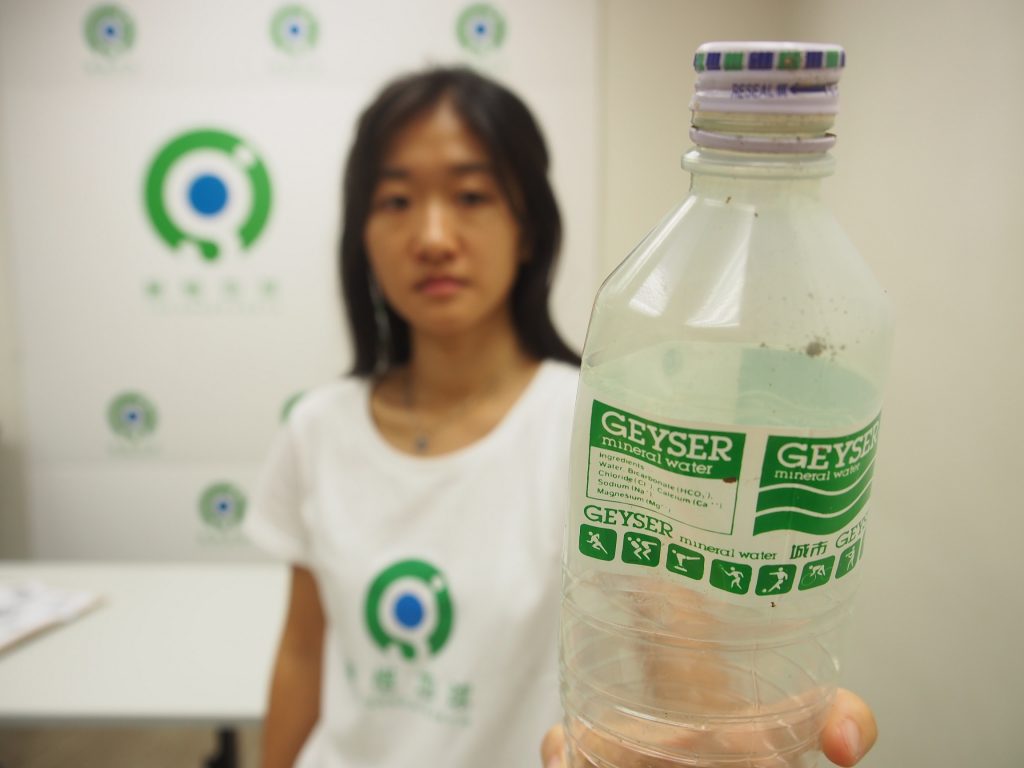 Plastic Bottle found after Super Typhoon Mangkhut. The metal cap shows it is 30-year old plus.

Coca-cola’s plastic bottle is so abundent among marine garbage. (Photo 1 of 2)

Coca-cola series plastic bottle is so abundent among marine garbage. (Photo 2 of 2)

Chinese Brand C’estbon gets the first place in the survey

Vita series accounted for the most bottles collected

We got a tonne of Vita’s water bottles

Sorting out by brands

Bottles on the beach