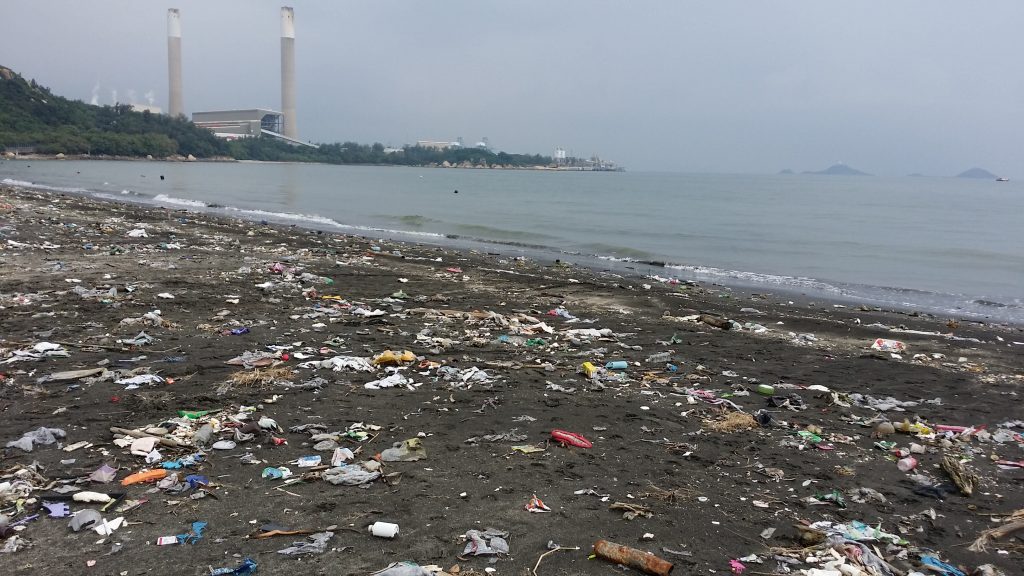 “Plastic or planet?” This question reminds me of another one: “Money or Life?

I used to be apprehensive about the idea that our blue planet was transforming into more of a plastic globe, but the statistic that global plastic use is expected to exceed 11 billion tons by 2050 has caused me to reevaluate.

Global plastic product supply far exceeds the planet’s actual demands. For example, the United State’s plastic production capacity is already higher than the national demand. Uncle Sam is still planning to invest USD 164 billion into beginning new plastic production projects or expanding existing ones. How much longer can we continue producing plastic at this rate before we are forced to choose between it and our planet?

While supply exceeding demand can partly be attributed to the fossil fuel industry and its role in suppressing the cost of plastic production, the relationship between the two are not as direct as one may think.

In fact, leaders in the plastic industry are harboring a hypothetical vision for the future, where millennials in developing countries play a crucial role in catalyzing plastic demand. To be successful, these leaders will need to successfully position plastics as “convenient and easy”, and make single-use cutlery, packaging, diapers, and other “short-lived plastics” a part of daily life. After all, in order to keep profits high, plastic manufacturers must seize any opportunity to expand demand for short-lived plastics. This is not a new market strategy, but a well-worn method in developed regions. A surge in demand for short-lived plastics in developed markets is quite apparent. PET bottles and plastic bags account for 34% of plastic products in the United States and 40% in Europe—a poignant statistic illustrating how effectively created demand can take hold.

The number of plastic varieties are in the thousands, but we only need to hone in on two main types—polyethylene and ethylene—to get a solid understanding of the how the plastic industry works. Together, these two chemical compounds represent a staggering 85% of total global plastic use. Propylene (PP) alone represents 23%, while plastics in the ethylene family (PE, PVC, PS, PET, etc.) together represent 62%. The following table of products sheds some light on why the world is overflowing with short-lived plastics. 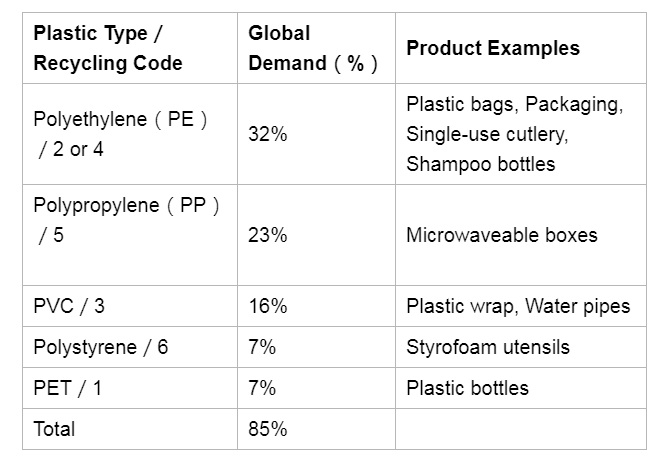 The net profit breakdown at ExxonMobil—the largest company in the oil industry—makes it clear that plastic is not simply the by-product of fossil fuels, but has grown into a massive industry of its own.

The chemical segment of ExxonMobil’s business uses petroleum products to manufacture organic materials and plastics (i.e. propylene, ethylene), generating 10.8% of ExxonMobil’s annual revenue in 2015—or 27.4% of total profit across the conglomerate. These statistics become even more mind-boggling in 2016, when profits from the chemical segment surpassed 4.6 billion dollars—nearly 20 times more than the 200 million dollars in profits earned from oil drilling. Plastics will continue to shower the petrochemical giants with easy profits—as long as they can keep demand up.

Source: The Production of Plastic and Petrochemical Feedstocks, Center for International Environmental Law, 2017

The Center for International Environmental Law (CIEL) released a report in September of last year called Fueling Plastics, harshly criticizing the oil refining and chemical industries for working together behind the scenes and causing the global plastic disaster. According to the CIEL, the aforementioned companies already knew that improperly disposed plastic poses a serious threat to marine ecology. Despite this, they refused to take responsibility for reducing plastics. Indeed, the American Chemical Council, a business interest group including representatives from ExxonMobil, DowDuPont, and others, has repeatedly opposed regulations to limit the use of plastic shopping bags.

According to the Fueling Plastics report, after fracking technology enabled US companies to exploit the natural gas inside of shale rock, the price of natural gas condensation—a material used in plastic production—dropped by two-thirds. Related industries called the news a “once in a lifetime opportunity” for the world of plastics.

China is not lagging behind in this “race for plastics”, and has recently developed Coal-to-Olefins technology to transform coal into ethylene and propylene. China is currently the world’s largest manufacturer of propylene—it’s estimated that by 2025, the annual production growth will reach 6.9%, compared to the current 2.3% and 4.2% in the United States and the Middle East, respectively.

A political commentator cited in the report notes that China is not harboring ambitions to become a plastic empire, despite their plan to inject hundreds of billions of dollars into the aforementioned technologies. Rather, China is looking for new ways to put its abundant endowment of coal reserves to good use and, more importantly, ensure labor stability. Coal mining simultaneously supports the livelihoods of poverty-afflicted coal regions, and puts rice on the tables of plastic manufacturing employees.

The United States, China, and the Middle East are all fighting for supremacy in the plastic market—and are even dragging INEOS, the reigning giant in Europe, into the race, as it invests in propylene facilities in Belgium. At the moment, approximately 4 to 8% of petroleum products are manufactured into plastic—this percentage is expected to jump to 20% by 2050, further increasing the petroleum industry’s reliance on plastic in the coming years.

As plastic manufacturing giants continue to churn out cheaper plastics, thickening the layer of short-lived plastics coating our planet, it is not too far-fetched to predict that this will have a disastrous effect on future animals. As for the future of humans, I’ll leave that for you to decide.

I wrote this piece (and another piece on short-lived plastics) to address the influx of information about the prevalence of plastics in our society—from microplastics, plastic bottles, straws, and single-use cutlery. I wanted to dig deeply into this issue and consider it from a more macro perspective. While reducing our plastic straw consumption is definitely a step in the right direction, it is merely skimming the surface of a much deeper issue. If we really want to make a change, there are two places we can start.

First: producer responsibility. Hong Kong, for example, is demanding beverage giants like Coca-Cola and Watsons to take the lead in reducing plastic consumption and recycling plastic bottles, urging supermarkets like ParknShop and City’Super to reduce their packaging, and requiring restaurant chains like Maxim’s and McDonalds to cut down on plastic use.

Second: understand how the petroleum industry and chemical engineering industries are influencing the “plastic war”. Although we may not all be directly associated with these industries, it is our responsibility as global citizens to remain informed. At the very least, we can all avoid buying stocks or otherwise investing in these companies.

This article may come across as pessimistic, but we cannot continue turning a blind eye to the problem—or else nothing will change. But there are certainly positive changes afoot. The European Union, England, and Taiwan, for example, have all implemented progressive plastic reduction policies in recent years, and many companies are voluntarily creating their own plastic reduction plans—something that would have been completely unimaginable in even recent history.

Will our ‘planet’ overcome ‘plastic’? In the end, the decision is up to us.